These statistics, produced by the National Foundation for Educational Research (NFER), show the ability of pupils in science, mathematics and reading for 2018.

This is the latest release in the series: Achievement of 15 year olds (Program for International Student Assessment) PISA national report

In 2018, results were submitted by 107 schools for 3,165 pupils in Wales. 79 countries participated including all members of the Organisation for Economic Co-operation and Development (OECD) and all four countries within the UK.

The above figures are based on comparing Wales with other participating countries, including the component parts of the UK. This is consistent with the national report produced by the NFER.

The PISA 2018 international report, and additional information, can be found on the OECD website.

PISA 2018 results for Wales by medium of school

PISA 2018 results by item for mathematics and science 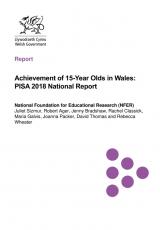 PDF
9 MB
If you need a more accessible version of this document please email digital@gov.wales. Please tell us the format you need. If you use assistive technology please tell us what this is.
PISA 2018 results
OECD website