A range of information collected through the National Survey for Wales about active travel by people during April 2017 to March 2018.

This is not the latest release in the series: Active travel (walking and cycling)

Active travel is measured as walking for at least 10 minutes or cycling to get to a particular destination. The following levels of activity were found (only including journeys made for active travel purposes). 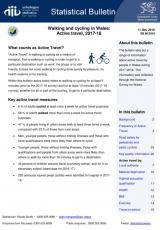 PDF
830 KB
If you need a more accessible version of this document please email digital@gov.wales. Please tell us the format you need. If you use assistive technology please tell us what this is.

Active travel (walking and cycling)
Report anything wrong with this page