Information on children on care orders and in placements, adoptions from care and numbers of children and young persons leaving care for April 2019 to March 2020.

This is not the latest release in the series: Children looked after by local authorities

Data in this annual update covers the start of the coronavirus (COVID-19) pandemic. Although the majority of this data relates to before the pandemic, it may have a small effect on these figures.

‘Looked after children’ refers to children who are looked after by local authorities in Wales.

A child is a person who is aged under 18. Section 74 of the Social Services and Well-being (Wales) Act states that a child who is looked after by a local authority is a child who is in its care; or provided with accommodation, for a continuous period of more than 24 hours, by the authority in the exercise of any functions which are social services functions, apart from functions under section 15, Part 4, or section 109, 114 or 115. 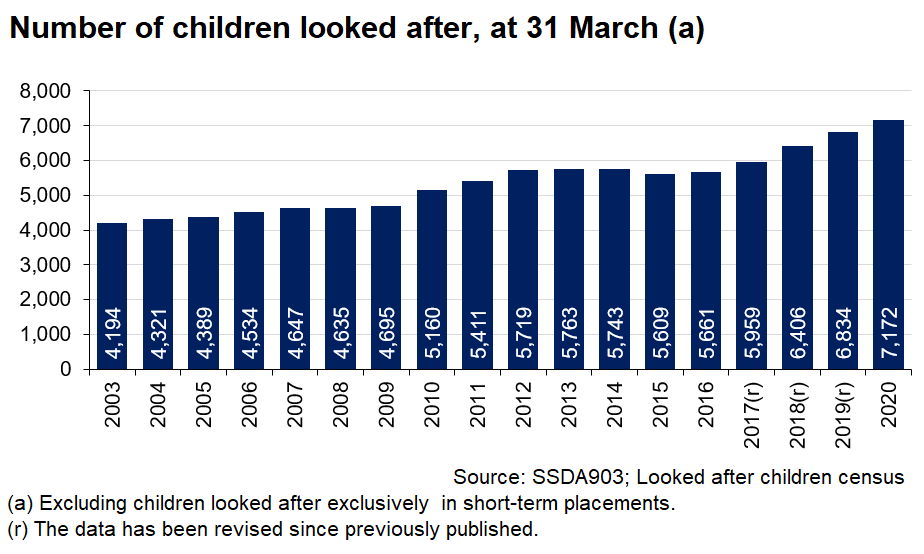 6,028 (84%) children were looked after under a care order(b). Although an increase in number compared to the previous year, this is a similar proportion. This proportion has been steadily increasing in previous years, whilst there has been a decrease in the proportion of children looked after under a single period of voluntary accommodation (under section 76 of the Social Services and Well-being (Wales) Act).

Over two-thirds (69%) of children were in placements inside the local authority where they were living when they first became looked after.

For children who started to be looked after during the year, the most common reason why the child received care and support initially was because of abuse or neglect (65% or 1,284 children). This proportion has been fairly stable in recent years.

For children who left care during the year, almost half (46% or 768 children) returned home to live with parents, relatives or other persons with parental responsibility. A similar proportion has been seen in the last three years but this is a smaller proportion than seen prior to 2017-18.

642 (9%) children had three or more placements during the year. This is a similar proportion to that seen in recent years.

Further information, including local authority level breakdowns, can be found on StatsWales. Some figures for previous years have been revised.

No full statistical release has been published for April 2019 to March 2020 due to analytical resources prioritising the response to the COVID-19 pandemic.

Information on quality can be found in the April 2018 to March 2019 statistical release.