A new 20mph default speed limit in communities across Wales could save £100m as deaths and injuries are reduced, according to new research. 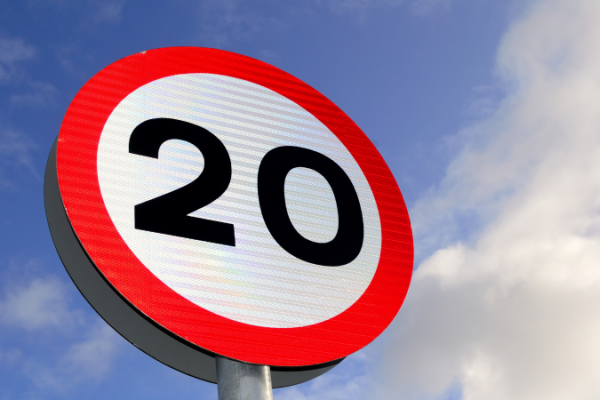 New research showing a reduction in deaths and injuries as traffic slows down is being published today alongside new survey results showing continued public support for the national roll out of the lower 20mph speed limit next year – a UK first.

The Welsh Government will introduce a default 20mph speed limit on restricted roads across Wales in September 2023. Restricted roads include those with street lights and are usually located in residential and built up areas with high pedestrian activity.

The new research, conducted by the Transport Research Institute (TRI) at Edinburgh Napier University, in conjunction with Public Health Wales, estimates a new default 20mph speed limit on residential roads across Wales will save around £100 million in the first year alone.

The estimated cost saving is the direct result of fewer deaths and injuries.

The new 20mph default speed limit is estimated to save more than 100 lives over a decade and 14,000 casualties in total could be avoided.

Almost two-thirds of people surveyed said they would support a 20mph speed limit where they lived and 62% said they wanted everyone to slow down on the roads.

When asked about safety, 64% of people said that 20mph speed limits “makes it safer for pedestrians”; 57% agreed that 20mph means “fewer serious collisions on the roads” and almost half (47%) thought 20mph would make it safer for cyclists.

“The evidence from around the world is very clear – reducing speed limits reduces collisions and saves lives.

“This new research shows the savings in terms of reductions in people being hurt or killed but the benefits of 20mph stretch much further than casualty savings alone. The report suggests the lower speed limit will help encourage physical activity and in turn reduce obesity, stress and anxiety.

“As with any change we know it will take time for people to adapt. But I’m pleased to see the early indications show a majority of people are in favour of 20mph, and I am confident that if we all work together, we can make the necessary changes that will benefit us now and in the future.”

7 November 2022
Report anything wrong with this page