Number of housing units owned or partly owned and managed by all social landlords as at 31 March 2019.

This is not the latest release in the series: Social landlord housing stock and rents

This includes the 11 local authorities who retain stock and all Registered Social Landlords (RSLs). It will include social and other types of housing.

(r) 2017-18 data has been revised since previously published. 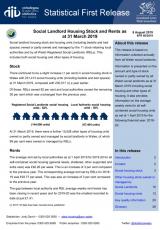 PDF
840 KB
If you need a more accessible version of this document please email digital@gov.wales. Please tell us the format you need. If you use assistive technology please tell us what this is.