Welsh Government plans to promote a progressive, modern Wales on the global platform provided by the FIFA World Cup in Qatar have been unveiled by Economy Minister Vaughan Gething today. 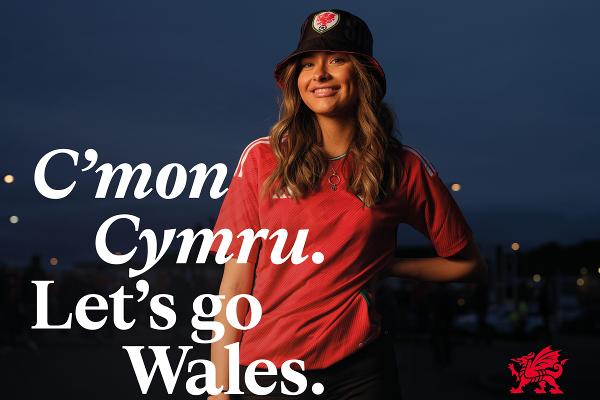 The campaign will project Wales’ values and secure a positive legacy from the country’s first World Cup campaign in 64 years.

With less than a week to go until Wales plays the first group match against the USA, the Welsh Government’s programme of activities is well underway in a bid to showcase the best of Wales on a global stage and introduce the nation to new audiences.

The ‘Lleisiau Cymru’ team of ambassadors will act as influential voices for Wales in Qatar, joining Ian Rush and Jess Fishlock who are both the FAW ambassadors for the 2022 World Cup.

“The World Cup offers an unprecedented opportunity for us to raise the profile of Cymru whilst also staying firm to and promoting our values of diversity, inclusivity and respect for human rights. As ‘Lleisiau Cymru’ we will ensure we maximise this unique opportunity for Wales, for football and beyond.”

An enhanced global marketing campaign is live, focusing on core target international markets including the USA and key European markets. The marketing campaign will promote Wales as an open, progressive nation, as a great place to do business and visit.

The campaign is focused on the people of Wales, it’s an invitation from a warm, welcoming country. The campaign has a real, natural, colloquial feel conveying that everyone’s welcome – wherever you’re from there’s a place for you here. A series of films have been released which shows the people of Wales inviting the world to Wales, showing the people, culture, community and landscape – a portrait of a modern, progressive and diverse country that’s welcoming the world in.

“I’m delighted to announce our comprehensive plans to promote an open, progressive Wales to the world during the FIFA World Cup.  When people see Wales, they will see our values.

“A global Audience of 5 billion people gives us a unique opportunity to showcase our nation and create a lasting legacy.

“We are introducing Wales to the world, inviting them to learn more about us, our culture, our people, and welcoming them into Tîm Cymru.  The campaign features stories from Wales, featuring authentic voices from across our communities. They are stories that’ll make people feel something about us, and make people want to be part of what we’ve got going on in Wales.

“As a government, we have been clear we will proactively use Wales’ place in the World Cup in Qatar to promote our strong Welsh values. In Wales, we are passionate about human rights and workers’ rights and believe that people should be free to live as their true authentic selves. We will continue to proudly advocate Wales’ approach to human rights, LGBTQ+ rights, political and religious freedom, inclusive education and fair work.

“This is an opportunity to promote Wales, but we also have an obligation to explain why we believe these values should be recognised. The management team, players and the FAW have all spoken out on these issues and they have the full support of the Welsh Government in promoting our values as a nation.”

A distinctive Welsh presence will also feature in the exhibitions produced by participating nations.  As the tournament will feature a strong UK Government presence, the Welsh Government is committed to ensuring that Wales is recognised as a nation and as a society with progressive values.

Following the announcement of Wales’ World Cup squad last week, a diverse representation of artists and cultural organisations will take to the stage to share Wales’ unique culture globally.

The artists include rapper Mace the Great; Yr Urdd, with Côr Dyffryn Clwyd; The Barry Horns – a brass band made up of Welsh football fans; Welsh rap artist Sage Todz; and multi-instrumentalist Kizzy Crawford, and many others.

They will perform in Qatar, the USA and Canada, as well as performing at international events as part of Gŵyl Cymru a national celebration taking place throughout Wales and the world.

“I’m looking forward to returning to the US after my debut at SXSW earlier this year. This is a huge opportunity for me to develop as an artist, as well as representing Wales at such an important moment for Welsh football and culture. I’m very excited to be showcasing in New York, working on a new video, and continuing my collaboration with Show Racism the Red Card and FAW.”

“Urdd members are great ambassadors for Wales, our language, culture and country.  We’re proud that Côr Dyffryn Clwyd will have this amazing opportunity to support the team but to also take Wales to the world and the global audience of the world cup on behalf of the young people of Wales. As an organisation we aim to inspire the next generation by offering unique experiences to extend their horizons and build self-confidence and we can’t wait to be part of the Wales Cultural Squad.”

To support Welsh Government objectives of promoting Wales, engage in diplomacy, and, importantly, communicate Wales’ values as a nation, the First Minister will attend Wales’ opening group game against the USA, while the Economy Minister, Vaughan Gething will attend the final group match against England game. These represent the most significant opportunities to raise the profile of Wales and make connections where we can share Wales’ interests and values.

14 November 2022
Report anything wrong with this page