The provisional data in this bulletin summarises HMRC estimates of goods trade flows exported and imported between Wales and partner countries in 2021, providing comparisons with the UK. These figures reflect the impact of the ongoing Covid-19 pandemic and the end of the EU transition period on Welsh goods trade.  Due to the significant impact of Covid-19 restrictions on international trade in 2020, many figures in this bulletin are compared against 2019. Users are encouraged to apply caution when making comparisons of trade over time. More detailed analysis is available via our international goods trade data visualisation interactive tool and StatsWales tables on exports.

Because of changes to the way in which the data is collected, additional low value trade that was previously allocated to countries and regions may now be reported under the ‘Unallocated-unknown’ category. This has led to a likely reduction in the UK to EU export values, and total export values for Wales (and other regions) from January 2021 onwards. More detailed notes of these effects can be read in the HMRC full commentary (UK Trade Info) on these statistics. Some of the exports data included in this report may get revised by HMRC as part of their routine revisions to the data set. The latest data will be available on the UK Trade Info website. 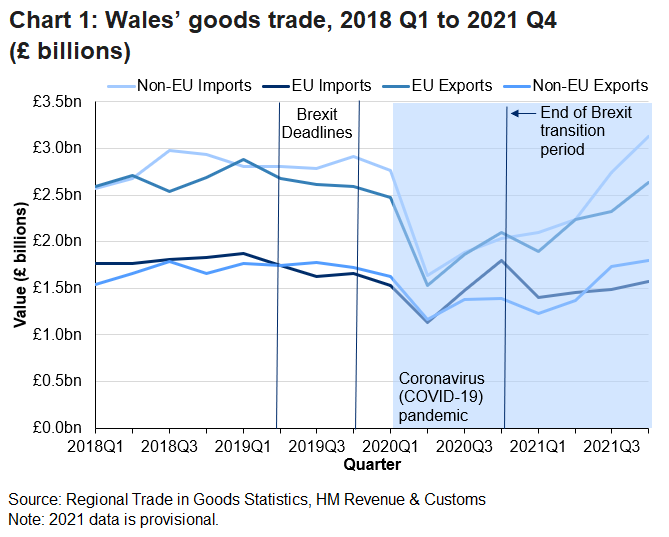 Exports and imports of EU and non-EU products fell sharply during 2020 due to the beginning of the pandemic but have generally recovered in recent quarters EU Exit deadlines may have led to a decline in EU exports, Wales’ exports performed strongly in recent quarters and are now back to pre-pandemic levels seen in the final quarter of 2019. Imports show an overall return to pre-pandemic level, this has been driven by non-EU imports, imports from the EU are still below 2019 levels. 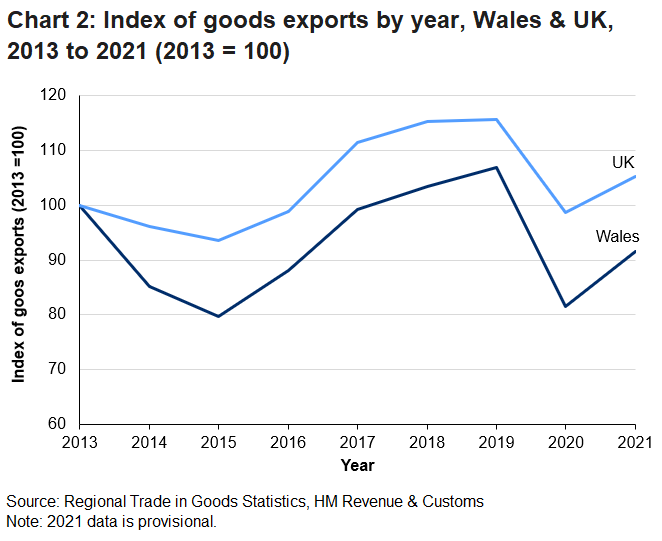 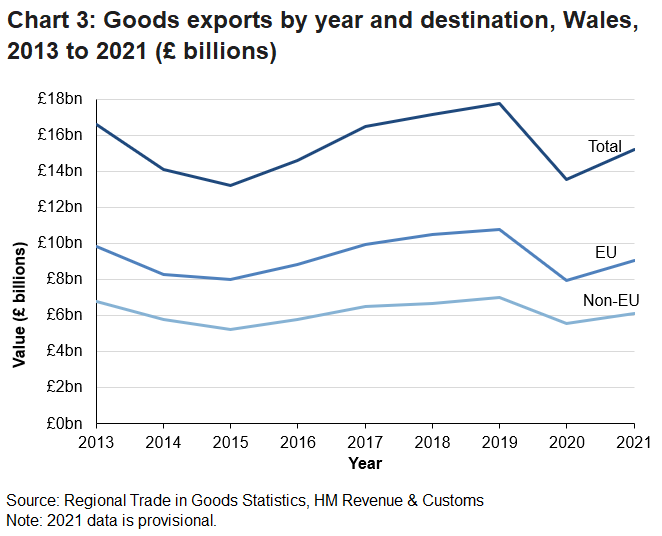 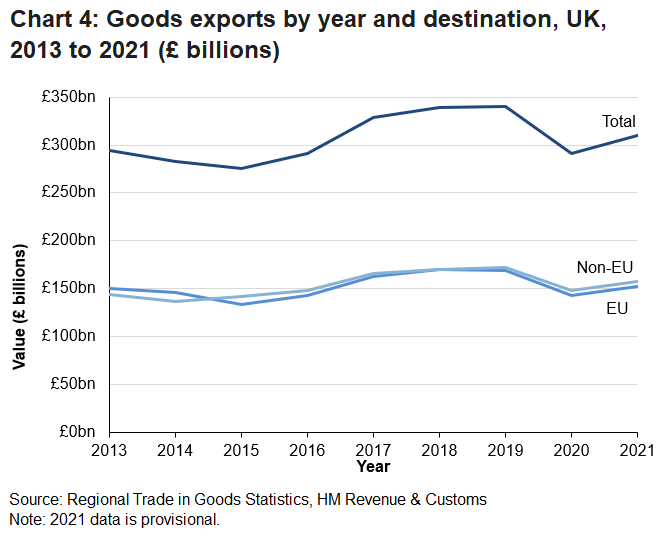 Compared to pre-pandemic levels in 2019, goods exports decreased the most to France with a decrease of £1.6 billion (55.9%). The decrease in export value to France was driven by exports of ‘Other Transport Equipment’ which decreased by close to £1.6 billion (79.8%).

However, when compared to 2020 goods exports to Belgium and Ireland have shown the largest increases and signs of a return to pre-pandemic levels, increasing the most with an increase of £0.6 billion (125.1%) and £0.5 billion (45.7%) respectively. The increase in export value to Belgium was driven by exports of ‘Medicinal and Pharmaceutical Products’ and ‘Plastics In Primary Forms’ which increased by £122.9 million (1,808.2%) and £112.2 million (230.1%) respectively. 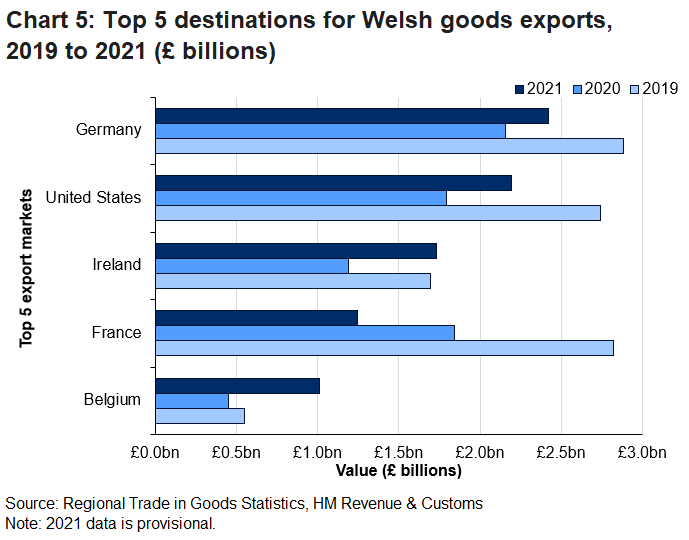 In 2021, the top product category exported from Wales was ‘Power Generating Machinery and Equipment’ which made up £2.1 billion (14.1%) of total goods exports.  This proportion was up from 11.1% in 2020 and down from 12.5% in 2019. It has replaced ‘other transport equipment’ that has been Wales’ top product exported historically. This is followed by ‘Petroleum, Petroleum Products and Related Materials’ and ‘Other Transport Equipment’ which made up £2.0 billion (13.3%) and £1.9 billion (12.4%) of total goods exports respectively. 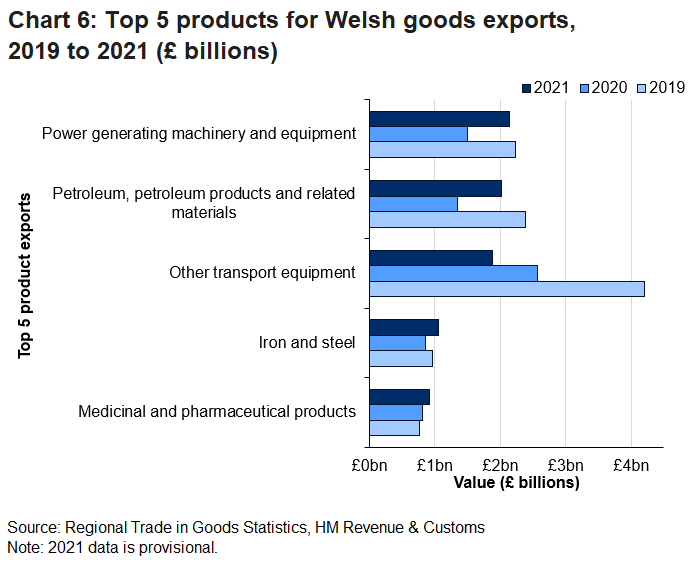 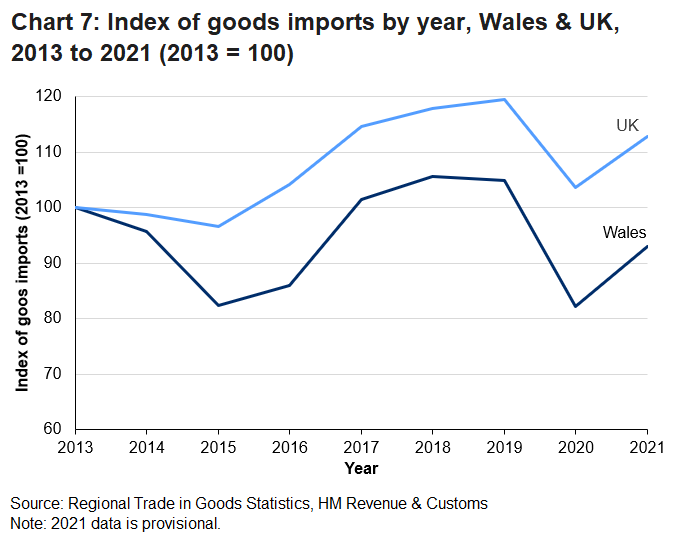 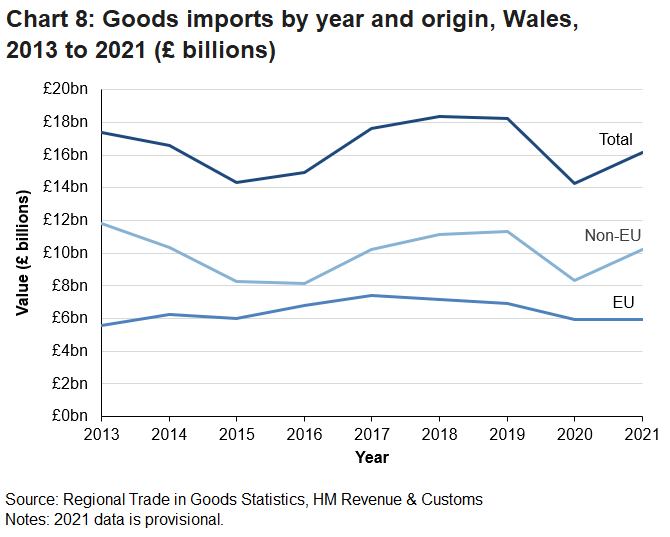 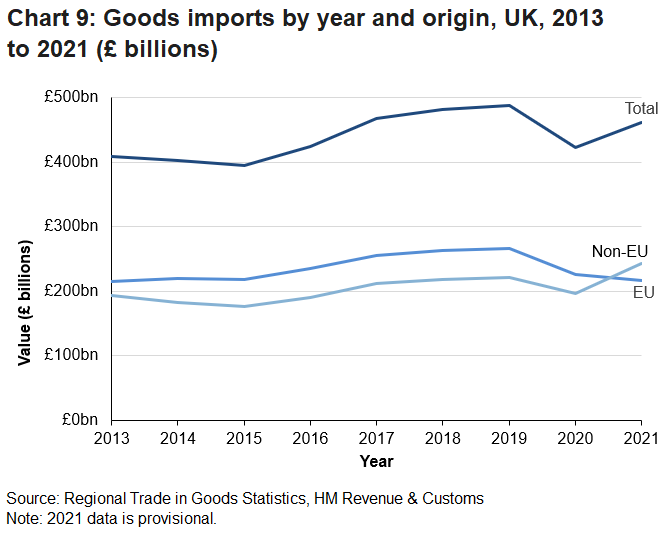 Compared to pre-pandemic levels in 2019, goods imports decreased the most from the United States with a decrease of £1.0 billion (32.8%) and Germany with a decrease of £0.8 billion (42.3%). The decrease in import value from the United States was driven by imports of ‘Petroleum, Petroleum Products and Related Materials’ and ‘Power Generating Machinery and Equipment’ which decreased by £466.3 million (39.3%) and £351.2 million (37.5%) respectively. 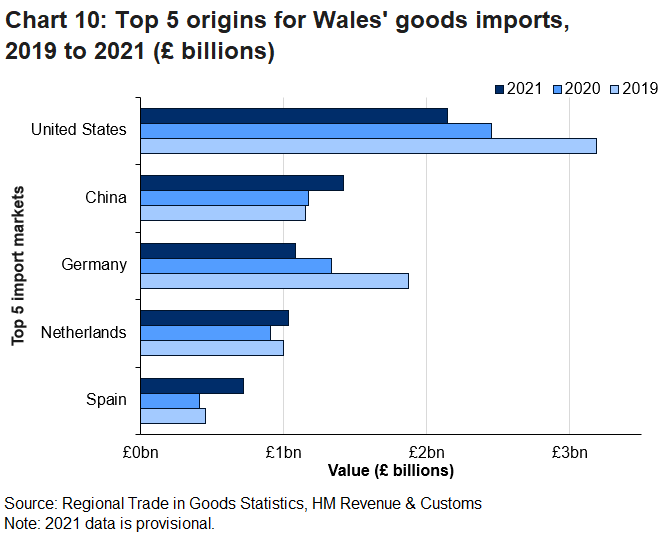 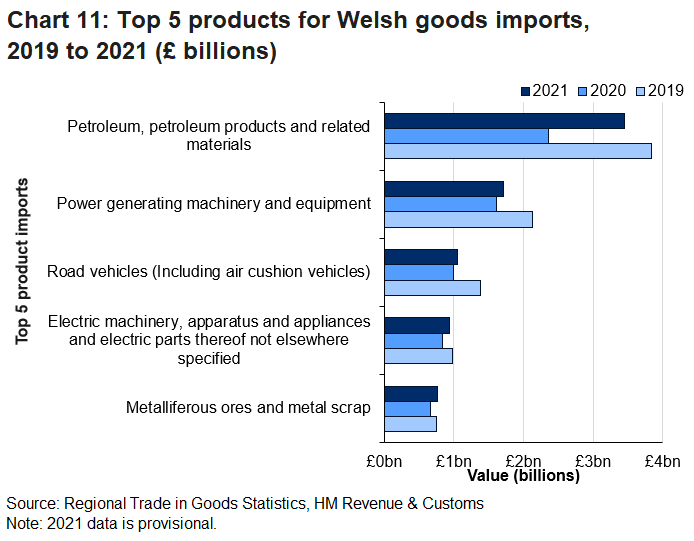 We want your feedback

Welsh Government statisticians continue to review its analysis and publication of HMRC trade data including which will affect the contents of this annual international trade bulletin.

In reviewing the statistics we publish, we aim to streamline the trade data available and will engage with users to make sure we continue to meet their needs. If you would like to be like to be involved in a review, or provide any feedback on any aspect of these statistics, please email stats.trade@gov.wales.

The provisional data in this bulletin summarises HMRC Regional Trade in Goods Statistics (RTS) of goods trade for Wales in 2021, providing comparisons with the UK. The COVID-19 pandemic and EU exit are likely to have affected Welsh goods trade in 2021.

This bulletin contains analysis data for 2021, 2020 and 2019. These statistics are used by the Welsh Government to monitor the performance in goods trade for Wales, as well as providing comparisons to the UK and other regions. This bulletin is also used by other public sector organisations, businesses, academia and private individuals.

The data in this bulletin are the Regional Trade in Goods Statistics (RTS) published by HMRC. These statistics refer to goods that have crossed the UK frontier. This means that exports from Wales to other parts of the UK are not included and there is no element included for components produced in Wales when the final product is completed in and then exported from another part of the UK. HMRC does not receive information in respect of goods that move wholly within the UK. Further, these figures do not contain any information on the export of services such as banking or tourism.

Experimental statistics on international trade in goods and services from businesses in Wales is also available on our Trade Survey for Wales. The Trade Survey for Wales is an online voluntary survey, which captures information directly from businesses with operations in Wales to measure trade flows (in terms of sales and purchases of goods and services) to and from Wales.

Comparable measures for other UK countries are published on StatsWales.

Data shown for the European Union (EU) are based on the 28 member states which comprised the EU (that is the 28 states less the UK for years the UK was an EU member, as only exports to destinations outside the UK are covered in this publication).

The quarterly totals of the value for RTS do not equate to the totals already published as the UK-wide Overseas Trade in Goods Statistics. Certain goods, such as North Sea crude oil, ships and aircraft stores, and those not in free circulation, that are shipped to EU countries using traditional Customs declarations, are not allocated to a UK region. Exports relating to overseas companies, registered for VAT in the UK, but with no place of business in the UK, have been excluded. Channel Islands and Isle of Man trade is also excluded. In addition, some exports to countries outside the EU cannot be allocated to a region because the VAT registration numbers have not been properly declared. These exclusions mean that it is not possible to reconcile total figures for regional trade against figures for UK trade.

From 1 May 2016, there was a methodological change to the way the non-EU trade-in-goods statistics are compiled. Following a change in legislation, the non-EU trade-in-goods statistics have changed from the ‘General Trade’ system of compilation to the ‘Special Trade’ system. For further information on the differences between General and Special Trade, please see the HMRC Methodology Paper for Overseas Trade in Goods Statistics. Special Trade data is only available for 2013 Q1 onwards. All data in this bulletin is Special Trade.

HMRC has revised the methodology used to calculate Regional Trade in Goods Statistics. Business trade is now allocated to a region based on the proportion of employees in that region rather than where the location of the Head Office of the business is. Under the old methodology Welsh EU exports accounted for 39.2% reported for the four quarters ending in June 2016. The new methodology stands at 60.9% for the four quarters ending in June 2016. Data are available under the new methodology from 2013 Q1. It is inappropriate to compare current data with data prior to 2013 and it has been excluded from this bulletin. Further information on the quality, revisions and methodology of the data can be found on the HMRC website.

Any figures which are currently provisional are marked with ‘(p)’ and are subject to revision. Revisions to the data arise as a result of including trade amendments and late submissions received by HM Revenue and Customs. Figures are provisional for up to 18 months.

All official statistics should comply with all aspects of the Code of Practice for Statistics. They are awarded National Statistics status following an assessment by the UK Statistics Authority’s regulatory arm. The Authority considers whether the statistics meet the highest standards of Code compliance, including the value they add to public decisions and debate.

The continued designation of these statistics as National Statistics was confirmed in 2013 following a compliance check by the Office for Statistics Regulation These statistics last underwent a full assessment against the Code of Practice in 2013.

Removed large tables of data from the release and ensured that the data is available in online interactive tables.

Improved visuals through our interactive trade data visualisation tool and commentary to make it easier for the readers to draw out key Messages.

The Well-being of Future Generations Act 2015 is about improving the social, economic, environmental and cultural wellbeing of Wales. The Act puts in place seven wellbeing goals for Wales. These are for a more equal, prosperous, resilient, healthier and globally responsible Wales, with cohesive communities and a vibrant culture and thriving Welsh language. Under section (10)(1) of the Act, the Welsh Ministers must (a) publish indicators (“national indicators”) that must be applied for the purpose of measuring progress towards the achievement of the wellbeing goals, and (b) lay a copy of the national indicators before Senedd Cymru. Under section 10(8) of the Well-being of Future Generations Act, where the Welsh Ministers revise the national indicators, they must as soon as reasonably practicable (a) publish the indicators as revised and (b) lay a copy of them before the Senedd. These national indicators were laid before the Senedd in 2021. The indicators laid on 14 December 2021 replace the set laid on 16 March 2016.

Information on the indicators, along with narratives for each of the wellbeing goals and associated technical information is available in the Wellbeing of Wales report.

The statistics included in this release could also provide supporting narrative to the national indicators and be used by public services boards in relation to their local wellbeing assessments and local wellbeing plans.