Data on people’s ability in Welsh and how often they speak the language for 2021.

The census of population is the key source used to measure the number of Welsh speakers in Wales. However, as the Annual Population Survey (APS) provides quarterly results, it is a useful source to look at trends in Welsh language ability between censuses. 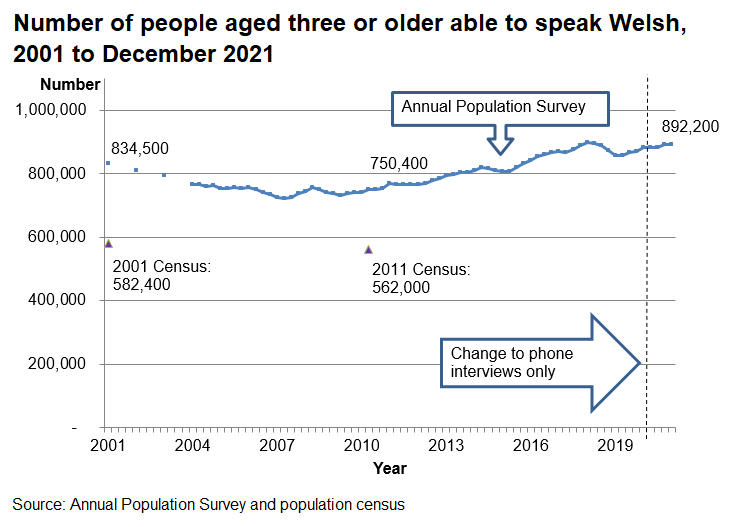 The census results and APS results for 2001 and 2011 have been included on the chart above to indicate the discrepancies between the two sources at the same time periods. There are a number of possible explanations for why census results would be lower than survey results. For example, the census is a statutory self-completion questionnaire while the APS is a voluntary survey, which uses face-to-face and telephone interviews.

The APS results should not be compared with census results, nor used to measure progress towards the Welsh Government target of a million Welsh speakers by 2050. The Welsh language strategy, Cymraeg 2050, clearly states that this target was based on census data and that progress towards this target will be monitored using future census data. The Office for National Statistics is aiming to publish 2021 Census data from late spring onwards.

A blog published by the Chief Statistician in 2019, gave a brief discussion on how to interpret the Welsh language data from the APS. More information about the differences between the APS and the census can be found in a bulletin presenting more detailed results on the Welsh language from the APS from 2001 to 2018.

Following government advice regarding the coronavirus (COVID-19) pandemic, the Annual Population Survey as well as all other Office for National Statistics (ONS) face-to-face studies about people, families and households were suspended. Further details of these changes can be found in this statement on the ONS website.

The Annual Population Survey (APS) was re-weighted by the ONS in August 2021, for the period January to December 2020. For more information on the re-weighting, see the statistical headline for April 2020 to March 2021.

The ONS is planning to further reweight the APS datasets, including data from the year ending December 2020. Further details of their plans will be provided once they have finalised a timeline.

At present, it is not possible to say whether any recent changes in Welsh language ability is as a result of the change in the way the survey is conducted, or real changes in the population’s ability in Welsh. The results should therefore be interpreted with caution.