Data on people’s ability in Welsh and how often they speak the language for April 2020 to March 2021.

The census of population is the key source used to measure the number of Welsh speakers in Wales. However, as the Annual Population Survey (APS) provides quarterly results, it is a useful source to look at trends in Welsh language ability between censuses. 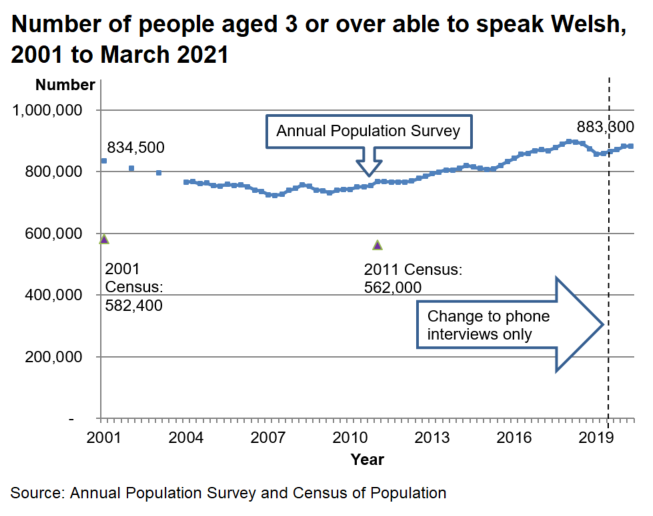 The Annual Population Survey was reweighted by the Office for National Statistics (ONS) in August 2021, for the period January to December 2020. The changes that the ONS have made to the weighting should reduce the bias of estimates at high levels of aggregation. However, some smaller breakdowns may be impacted negatively, and more extreme changes could be seen given the reduced size of the underlying sample since the start of the pandemic.

The comparisons with previous data, below, are based on the data that have been reweighted. Further information about the impact of the reweighting on the data is available in the ‘Changes to the survey’ section.

The Annual Population Survey (APS) is a UK-wide survey conducted by the Office for National Statistics (ONS). The APS, which began in 2004, is compiled from interviews for the Labour Force Survey (LFS), along with additional regional samples reaching an approximate sample of 320,000 respondents across the UK. In Wales, around 35,000 people are included in the survey each year. Details about how the survey is developed and carried out can be found on the Office for National Statistics website.

The census results and APS results for 2001 and 2011 have been included on the chart above to indicate the discrepancies between the two sources at the same time periods. There are a number of possible explanations for why census results would be lower than survey results. For example, the census is a statutory self-completion questionnaire while the APS is a voluntary survey, which uses face-to-face and telephone interviews.

A blog published by the Chief Statistician in 2019, gave a brief discussion on how to interpret the Welsh language data from the APS. More information about the differences between the APS and the census can be found in a bulletin presenting more detailed results on the Welsh language from the APS from 2001 to 2018.

Following government advice regarding the coronavirus (COVID-19) pandemic, the Annual Population Survey as well as all other Office for National Statistics (ONS) face-to-face studies about people, families and households were suspended. Further details of these changes can be found in this statement on the ONS website.

The Office for National Statistics has continued to monitor the impact of this change to the survey method on the estimates, and has reweighted the estimates accordingly. It found that the change had led to an increase in the non-response trend, particularly from those with a country of birth or nationality outside the UK, and a higher proportion of owner-occupiers participating in the survey and a lower proportion of renters participating in the survey than before the pandemic.

Another reason for further revision of the estimates was that survey responses were weighted to national population projections. The current projections are based on demographic trends prior to the coronavirus (COVID-19) pandemic. The Office for National Statistics has now reweighted the Survey data to new populations derived using growth rates from HM Revenue and Customs (HMRC) Real Time Information (RTI) for January to December 2020 (i.e. quarters 1, 2, 3 and 4 of 2020) to adjust the estimates as a result of these changes.

The new estimates about the ability of the population aged three or over to speak Welsh are very similar to the original estimates, varying by between 0 and 0.2 percentage points (or between -600 and 4,800) from the original estimates, at a Wales level. This varies at a local authority level and for the other Welsh language skills (including frequency of speaking Welsh).

At present, it is not possible to say whether any changes in Welsh language ability between March 2020 and March 2021 is as a result of the change in the way the survey is conducted, or real changes in the population’s ability in Welsh. The results should therefore be interpreted with caution.