Data on people’s ability in Welsh and how often they speak the language for October 2019 to September 2020.

The Census of Population is the key source used to measure the number of Welsh speakers in Wales. However, as the Annual Population Survey (APS) provides quarterly results, it is useful to use the APS to look at trends in the Welsh language between censuses. 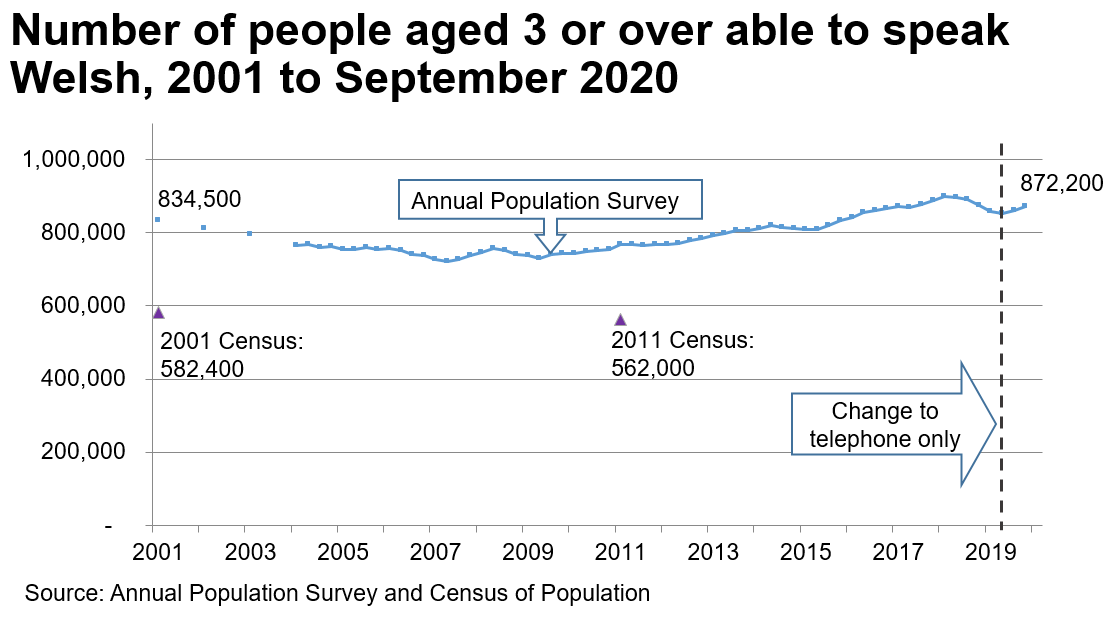 The chart shows how these figures have been gradually increasing each year since March 2010 (25.2%, 731,000), after they had been gradually declining from 2001 to 2007. The number of people reporting to be able to speak Welsh declined from December 2018 to March 2020, before increasing again in the most recent two quarters. This increase should be treated with caution due to the change of survey mode since mid-March 2020 because of the coronavirus pandemic. See ‘Changes to the survey’ below.

The Census results and APS results for 2001 and 2011 have also been plotted on the chart above to indicate the large discrepancy between the two sources at the same time periods. There are a number of possible explanations for why Census results would be lower than survey results. For example, the Census is a statutory self-completion questionnaire while the APS is a voluntary survey, which uses face-to-face and telephone interviews.

A blog published by the Chief Statistician last year, gave a brief discussion on how to interpret the Welsh language data in the APS. More information about the differences between the APS and the Census can be found in a bulletin presenting more detailed results on the Welsh language from the APS from 2001 to 2018.

Following government advice regarding the coronavirus (COVID-19) pandemic, the Annual Population Survey as well as all other Office for National Statistics (ONS) face-to-face studies about people, families and households were suspended.

By comparing those who completed the survey over the telephone with those who completed the survey face-to-face in the period before March 2020, respondents did appear to be more likely to state that they could speak Welsh when answering the survey over the telephone. The ONS have been closely monitoring the impact of the change in survey mode on the estimates and had found that this change had resulted in a higher proportion of owner occupiers participating in the survey and a lower proportion of renters participating in the survey than before the pandemic. As a result, they have revised how they weight the data and have re-weighted their estimates for January to June 2020 (i.e. quarters 1 and 2 of 2020) to account for this change. Previous headline statistics and StatsWales tables have been updated to include these re-weighted estimates.