This agreement implements the powers in the Wales Act 2014. It supports the devolution of stamp duty land tax and landfill tax. It also supports the creation of Welsh rates of income tax.

Read details on this page 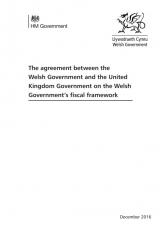 PDF
377 KB
If you need a more accessible version of this document please email digital@gov.wales. Please tell us the format you need. If you use assistive technology please tell us what this is.