For the period ending March 2020, data on children and pensioners in material deprivation and low income in Wales.

This is the latest release in the series: Material deprivation and low income

These are the latest National Statistics for Wales. See our Measures of poverty: April 2020 to March 2021 article on why we advise against use of the 2020-21 dataset for Wales.

DWP use the Family Resources Survey to publish statistics about children and pensioners in material deprivation in their Households Below Average Income report, broken down for UK countries and regions of England.

14% of children living in Wales between 2017-18 and 2019-20 were in material deprivation and low income households. Low income households are those that had a total household income below 70% of the UK average household income, before housing costs were paid. This is up slightly from the 11% reported last year. The corresponding rate is 12% for England, 11% for Scotland and 7% for Northern Ireland. This is a 3 percentage point increase from that reported last year. However, please take care when comparing data over time because trends can be volatile due to small sample sizes for Wales.

7% of pensioners living in Wales between 2017-18 and 2019-20 were in material deprivation (income is not considered for pensioners). This is slightly lower than the 8% reported last year. 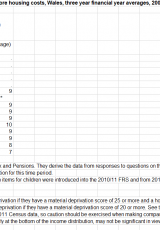 ODS
9 KB
If you need a more accessible version of this document please email digital@gov.wales. Please tell us the format you need. If you use assistive technology please tell us what this is.
Material deprivation
StatsWales website